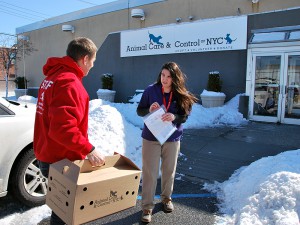 The Lives of Thousands of Additional Homeless Pets Will be Saved

Friday, January 23, 2015 – New York, NY – Jane Hoffman, president of the Mayor’s Alliance for NYC’s Animals (The Alliance), said today that the increased funding and support for Animal Care & Control of New York City (AC&C) announced today by the Health Department will save the lives of thousands of additional homeless pets every year across the five boroughs.

The Alliance is a private charity, not affiliated with government, that partners with more than 150 rescue groups and shelters, including AC&C, to offer important programs and services that save the lives of New York City’s homeless animals.

Hoffman said, “The Alliance has been proud to partner with AC&C for the past decade. Together, we have worked to transport more than 80,000 animals from the City’s shelters and move them into rescue groups, shelters, or homes where they have a chance for a new start in life. With the construction of a new, state-of-the-art adoption center and the doubling of its fleet of mobile adoption vans, AC&C will be able not only to sustain its tremendous progress, but keep the momentum moving forward.