Miracle on 35th Street…or the Meow Heard Round the City 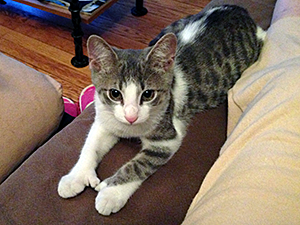 Bright-eyed Bug is snug in his new home after being rescued from a Midtown Tunnel exit road.

Living in New York City, people are accustomed to hearing all sorts of sounds at all hours of the day and night, especially if they live in busy midtown Manhattan. Even so, one resident of an apartment building with windows facing an exit road for the Midtown Tunnel did not expect to hear a kitten meowing loudly outside her windows one evening this past summer.

When the road closed to traffic around 11:00 p.m., the resident went to investigate, armed with a bowl of cat food. She spotted a kitten darting back and forth across the road between 35th and 36th Streets. The kitten ignored both her and the food. The woman (who prefers to remain anonymous) eventually, reluctantly, returned to her apartment.

The following day, the concerned person was relieved to run into neighbor Jordana Serebrenik, who has been volunteering with City Critters, an Alliance Participating Organization (APO), since 2007. That evening, after the road closed, Jordana and her neighbor went outside with a humane trap baited with food. They placed the trap on the narrow sidewalk portion of the street knowing that, even if the road was officially closed, an emergency vehicle might still come barreling through in an instant.

All the while they could hear the kitten meowing loudly. “Because of the high walls, sound echoes there, and it was hard to tell where exactly the kitten was,” says Jordana. But they eventually spotted him, first running around and then poking his head up out of a rainwater gully on the east side of the exit road. 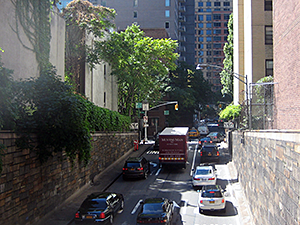 The view, looking south from 36th Street, of the Midtown Tunnel exit road and its narrow sidewalks, where Bug the kitten initially evaded rescue efforts. (Photo by Thea Feldman)

The two neighbors were out until 3:30 in the morning, but once again the food lure failed. This continued for a couple of long, late nights, during which time they tried a variety of tempting treats from sardine juice to tuna, all to no avail. At the same time, importantly, the word about the “Midtown Meower” had spread amongst the cat rescue and Trap Neuter Return (TNR) community in New York City, and many individuals offered advice and/or came to help, including Debi Romano, the president and co-founder of SaveKitty Foundation, another APO, and Annie Sullivan, an extremely active NYC-based TNR advocate and practitioner. In addition, in true New-York-City-story style, someone riding by in a cab saw the kitten on the side of the exit road and posted it to a local Yahoo feral cat discussion group, whose members also began to participate in figuring out how to corral the kitten.

“It was a true collaborative effort,” reports Jordana, and it was obviously also an urgent one, given the extremely dangerous location. “It was a tricky rescue,” Jordana says, “because there was no place to contain the kitten and food wasn’t working as a lure.” She credits Holly Staver, the President of City Critters, for coming up with the plan that eventually worked.

Holly reasoned that the kitten’s ongoing loud, plaintive vocalizing and his failure to respond to food lures even though he hadn’t eaten for days, meant that he was calling for something else. She determined that the kitten was crying for his litter. She also believed that this was a good sign for both the rescue effort and the kitten’s future: If the kitten was calling out for companionship, it would most likely bond pretty quickly to another cat. Holly also knew, from her many years of trapping cats, that a cat can be used as a lure to trap another cat or kitten.

“It occurred to me that there are probably recordings of cats and kittens out there that you can use to attract and trap a cat,” says the unassuming Holly. Sure enough, she found what she was looking for on YouTube. On an old micro-cassette recorder, she recorded nine minutes of cats meowing. But she also wondered if this skittish kitten might need more than an auditory lure. 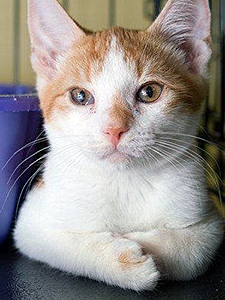 Robbie to the rescue! This adorable little guy helped lure Bug into the trap and to safety. (Photo by Lori Grunin)

At the time Holly was fostering an orange kitten named Robbie, who himself talked back to the recording she had made. Robbie was also about the same age as the kitten they were trying to trap and his sweet and mellow temperament made him a good candidate to assist in the effort. So, Robbie was recruited as a rescuer.

Holly, Jordana, the neighbor, and others set the trap up, baited with food, again. This time they put Robbie, in a carrier, at the far end of the trap, so that the other kitten had go into the trap to reach him. They placed the recorder under a towel on top of Robbie’s carrier, hit play, and backed away to watch.

As he had done before, Robbie began talking to the recording. The sounds attracted the other kitten, who cautiously approached and retreated several times. After the recording ended, Robbie kept talking and the other kitten responded. Eventually, the kitten worked up his courage and entered the trap. At least that’s what the rescuers thought. It was too dark to see much but they heard what sounded like the trap door shutting. They advanced slowly and quietly and found the kitten relaxed and eating inside the trap.

The now-calm kitten, a tabby and white polydactyl fellow, spent the night in the bathroom of the woman who had initially heard him meowing. He had a thorough vet check the following day and received a good bill of health. It was also determined he was about four months old.

The woman decided to adopt the kitten, who she and Jordana have named Bug. As Jordana explains, “It’s for his darting movements, but also for the miniature-dinosaur-size water bugs that were everywhere we were standing at night!”

As for Robbie, he had been adopted prior to his stint as a rescuer, and he’s now in his forever home too.

In looking back, Holly thinks there’s a takeaway lesson here. “I think we should listen more to what cats are trying to tell us,” she says, suggesting that perhaps recordings will work in other rescue situations, such as using the recording of a cat in heat to attract and trap a non-neutered male. “The best thing about this rescue,” she adds, “is that it’s over! And that Bug got a home.”